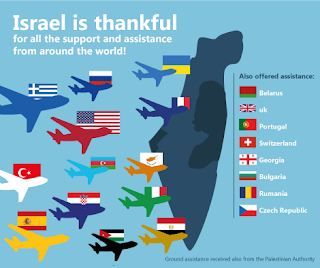 
Palestine for helping put out fires

The Palestinian Authority contributed eight firetrucks and 40 firefighters to combat the fire in Haifa. All they got was a footnote.
The Israel Embassy in the U.S. published a thank you message on its Facebook page on Friday dedicated to all the countries that helped put out the wildfires raging across the country. Under the headline “Israel is thankful” — right on time for Thanksgiving — every country that sent firefighting crews was awarded a small image of plane with its flag. As can be seen above, countries such as the U.S., Cyprus, Turkey, Egypt, Jordan were given this honor. Even countries that expressed their willingness to help, such as Portugal or Belarus, were mentioned.
Only the Palestinian Authority — which sent eight fire trucks and 40 firefighters to help put out the flames in the northern city of Haifa — was somehow forgotten. Or to be more precise, the PA was mentioned in a small footnote on the bottom right of the image, without a flag or a plane of its own — only the words: “Ground assistance received also from the Palestinian Authority.”
Maybe it’s because they don’t have a supertanker?
[Update, 7:40 p.m.: Two days after Palestinian firefighters were sent to help put out the fires, Prime Minister Netanyahu phones Mahmoud Abbas to thank him for the help.]
Related:
Before the fires are out, Israeli politicians blame the Arabs
No fires or inciting politicians can destroy our shared society

- settembre 13, 2021
ebrei europei ed italiani HAARETZ.COM Report: Israeli grandfather absconded six-year-old survivor of The grandfather of 6-year-old Eitan Biran, who survived a cable car accident near Lake Maggiore this summer that killed both his parents, spirited the child to Israel via private jet this Saturday, according to a report in Italian newspaper Corriere della Sera. Some family members described it as an international kidnapping. Credit: According to  the report , 58-year old Shmuel Peleg picked up the boy – who he believed was in poor “mental and physical condition” – for a court-ordered visit. Peleg, who had retained possession of Eitan’s Israeli passport, then drove him in a rental car to Lugano, Switzerland where he and his grandson boarded a chartered business jet to Tel Aviv. An attorney for the family subsequently confirmed to Aya Biran-Nirko, his paternal aunt, that Eitan and his grandfather were in Israel. Attorneys for Peleg claimed that their client could not be guilty of kidnap
Continua a leggere

- giugno 14, 2020
Palestina :area C annessione strisciante - occupazione militare Over 100 international law experts sign letter against West Bank annexation Over 100 experts and scholars of international law from around the world have called on Israel to not annex parts of the West Bank, which Prime Minister Benjamin Netanyahu has declared it is his intention to do. In a  letter sent Thursday , the signatories warned that annexation would “constitute a flagrant violation of bedrock rules of international law, and would also pose a serious threat to international stability in a volatile region.” The document was addressed to Netanyahu, Defense Minister Benny Gantz, Foreign Minister Gabi Netanyahu has vowed to swiftly, and unilaterally, extend Israeli sovereignty to some 30 percent of the West Bank in accordance with the Trump administration peace plan, which also paves the way for the eventual creation of a Palestinian state on the remaining territory. The letter was published on the website of Kevin Jo
Continua a leggere