The Civil Administration has issued demolition orders against dozens of structures in the encampment, including the local school. 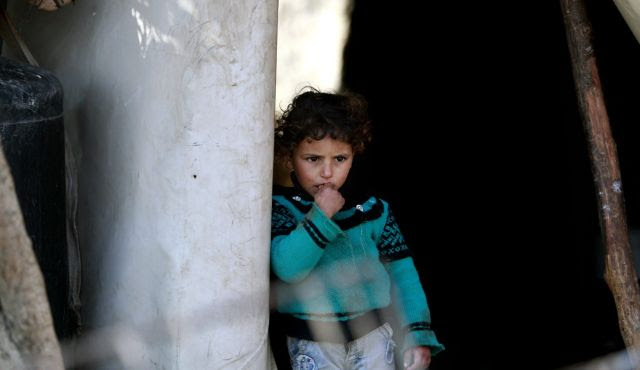 File photo: A Palestinian Bedouin girl looks at rubble of tents and sheds destroyed by the IDF near the West Bank town of Tubas. Feb. 17, 2014. Photo by AP

The Civil Administration on Thursday confiscated playground equipment that the Italian government had donated to a school at the Khan al-Amar Bedouin encampment east of Jerusalem.
A representative of the Italian Consulate accompanied the delivery, which came in two trucks, one carrying cement and the other a three-seat swing set and a slide with a tunnel and two ladders. The children barely had a chance to get excited about the equipment when Civil Administration inspectors appeared and announced they were seizing the two trucks and their contents, on the grounds that the installation was illegal. The consular representative drove off with the inspectors in an effort to overturn the decision.
The encampment’s school, built in 2009, is an ecological structure made of mud and old tires that maintains an even temperature in the classrooms during both winter and summer. It was built by the residents themselves with European financial aid, and inspired by an architectural approach that uses recycled materials easily obtainable by the poor.
The Khan al-Amar encampment, which is along the road leading to Jericho, is home to the Jahalin tribe that Israel expelled from the Negev in the 1950s. Around 250 people have lived in for decades in the camp, which is situated on land belonging to the village of Anata. The settlement of Kfar Adumim is only two kilometers from the site, but (as with all the other Bedouin communities between East Jerusalem and Jericho), the Civil Administration refuses to let Khan al-Amar residents build, connect to the infrastructure, or put up as much as a tin shack, animal pen or tent, on the grounds that the area does not have an approved master plan.
Thus the school, which has 128 pupils, mostly girls ages 6-13, was built without a permit. The Civil Administration has issued demolition orders against it and against dozens of other structures in the encampment.
In recent years Kfar Adumim has petitioned the High Court of Justice three times, demanding that the demolition orders be carried out. The first two petitions were denied, and last November the settlement (and two of its neighborhoods, Alon and Nofei Prat) filed another petition.
A report by the Bimkom – Planners for Planning Rights organization shows some 300 structures in the settlement were built illegally.
The Civil Administration did not respond to a request for comment.
Diamo voce a queste ingiustizie, perchè il DIRITTO AL GIOCO è un diritto fondamentale di ogni bambino!
http://www.haaretz.com/news/middle-east/.premium-1.576978